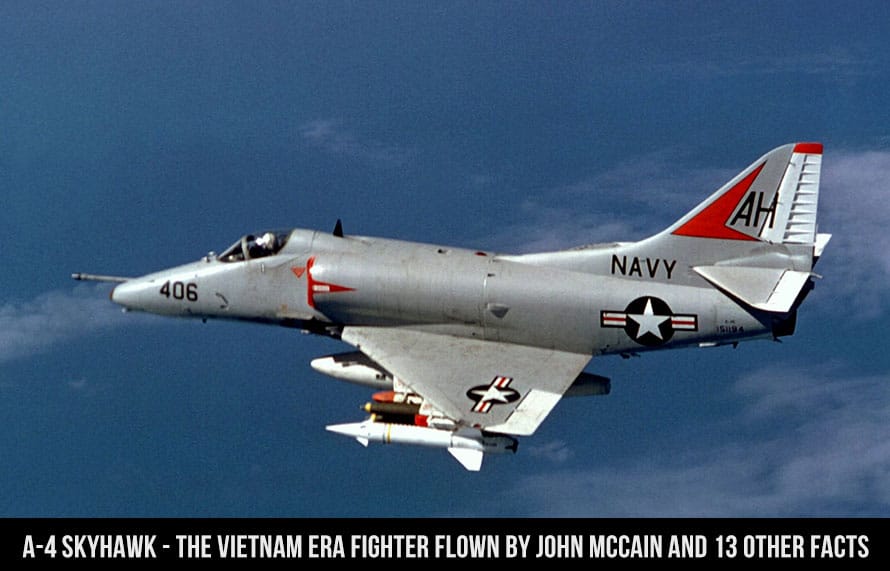 It was a single seat, subsonic jet-powered aggressor aircraft that was designed to replace the A-1 Skyraider. The primary operators of this delta wing, carrier-capable attack aircraft were the United States Navy and Marine Corps, as well as the Israeli and Argentine Air Forces. 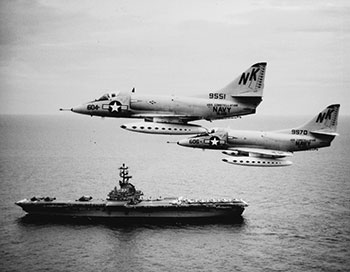 The A-4 had a small airframe that allowed for easier storage on the smaller aircraft carriers from the World War II era. It had a delta wing, which is a short-span wing design, enabling many to be stored on a carrier without complicated wingtip folding requirements. Despite its small airframe, the A-4E version contained major upgrades to its engines and strengthening of the frame to accommodate more weapons pylons and avionics improvements.

It was introduced into service in October 1956 and during its production years between 1954 and 1979 2,960 would be produced. Though the Skyhawk had been flown since 1957, it would be eight years later, during the Gulf of Tonkin incident in 1964, that the Navy’s A-4 would see its first combat missions. We’ve included more information about that in the facts below.

The A-4E Skyhawk was a formidable attack platform, a perfect fit for the Vietnam War due to its speed, maneuverability, and ruggedness since the enemy primarily used anti-aircraft artillery (AAA) and small arms fire to defend against aircraft. The A-4 was the first aircraft to drop a bomb in Vietnam and one of the last aircraft shot down during that war, resulting in one of the final times a pilot was captured and held as a prisoner of war (POW) in Vietnam.

Though not as well known as bigger multirole fighters of its time, the A-4 still cemented its own place in history. We will take a moment to get to know this attack fighter with a few facts below.

13 Facts About the A-4 Skyhawk

The United States retired their A-4 Skyhawks from the Marine Corps in 1998 and the Navy in 2003. The Israeli Air Force would eventually retire their A-4s in 2015. Today, the A-4 Skyhawk is in limited use for a few countries like Brazil, Argentina, and Singapore.

One of its primary uses today is as aggressor aircraft flown by private companies that fly head-to-head against U.S. military fighter pilots for training purposes. Its speed and nimbleness, along with an impressively tight turning radius, made the Skyhawk a natural at playing an adversary aircraft.

For 50-plus years, the A-4 Skyhawk filled the Navy and Marine Corps needs for a low-cost, light-weight, low-maintenance, carrier-based attack aircraft. Though no longer flown in the U.S. military, many of the 2,960 airframes produced are still in service and must be maintained along with their avionics and electronics to fulfill their missions.

Even with tight funding, systems must be maintained. This requirement has caused a reduction in new manufacture requirements, but also a growth in depot and component repair needs. Often the only way to maintain these systems is to reverse engineer obsolete technology and develop remanufactured or re-engineered “Form/Fit/Function” replacement units.

Duotech maintains an AS9100D registration and is a qualified repair station for hundreds of items. Learn more below about Duotech’s long-term sustainment capabilities for the F-16 Fighting Falcon and proven aircraft like the F-5 Tiger II and T-38 Talon.