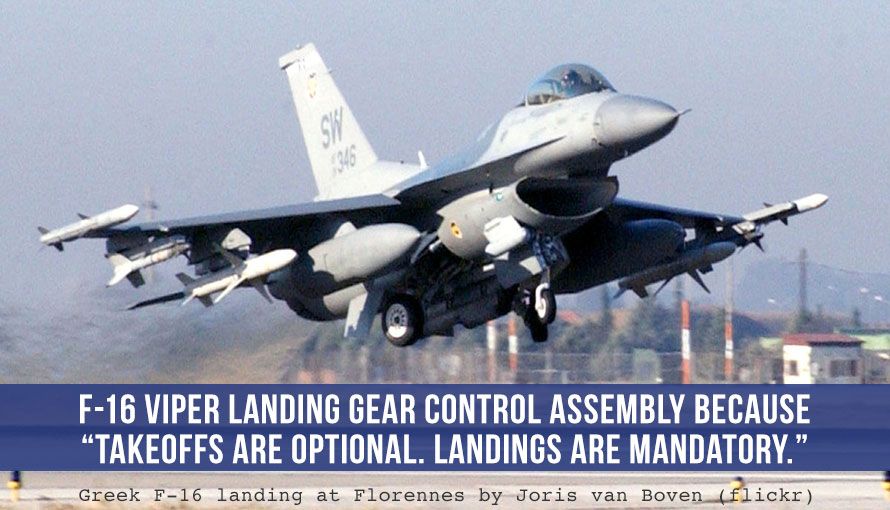 Isaac Newton’s quote based on his Law of Universal Gravitation “What goes up must come down” illustrates the force acting upon a person jumping into the air, a helium balloon released into the sky, and a plane that has taken off from a runway. Simply stated, a particle attracts every other particle in the universe using a force that is directly proportional to the product of their masses and inversely proportional to the square of the distance between them.

When a plane sits on the runway, gravity keeps it connected to the earth. As a plane accelerates and lifts off the runway, gravity naturally continues to pull the aircraft back to the earth. While there is enough thrust to counter the drag of the plane so that the airspeed is maintained and the wings continue to provide lift, gravity is not allowed to send the pilot diving to the earth. Eventually all things come to an end, fuel being one of them, and the plane descends to land.

Takeoffs are optional. Landings are mandatory.

Unless you are performing water landings in a seaplane, you need landing gear to successfully complete any flight. Small, light, slow flying aircraft often has fixed landing gear. Faster moving aircraft will have retractable gear to reduce the drag and increase performance. Once an aircraft lifts off the runway, the pilot will retract the landing gear. The system that retracts the gear may be hydraulic, electric, or hand operated.

When retracted, the landing gear folds away completely or partially inside the wheel wells of the airplane. The wheel wells may be in the wings or in part of the main body of the craft. These wheel wells can take up storage or fuel space. When the landing gear will not retract to its proper resting spot during flight, fuel will be consumed more quickly than is planned for a flight. It also can diminish the performance of the aircraft. Because landing gear can be damaged at certain airspeeds, a flight experiencing landing gear retraction issues may need to fly at much slower speeds or return to the airport immediately for repairs. Flying is the second greatest thrill known to man…Landing is the first!

Another issue with retractable landing gear is when it comes time to land and the gear cannot be deployed. There are backup options in place to prevent an emergency belly landing of an aircraft. In case of a faulty extension of the landing gear, an aircraft may be equipped with an alternate hydraulic system. Nitrogen compressed air may be used to blow down the gear, or gravity may be the alternative method. With gravity, a pilot may pull a switch that triggers a pin used to hold the gear up so the landing gear’s own weight can make it fall down and lock into place. Some pilots might have to manually lower the gear using a hand crank. The F-16 Fighting Falcon has a retractable tricycle landing gear. The pilot steers the F-16 using the nose wheel of the aircraft and independent brakes on each main landing gear wheel. If the landing gear fails to deploy before landing then the pilot can force it down with compressed air bottle.

A Landing Gear Control Assembly, like the one shown below under repair, provides the pilot with a control to raise and lower the aircraft landing gear. If the pilot is about to land without the landing gear deployed, the red light on the gear handle, referred to as the “tomato”, lights up and an audible alarm warns the pilot. You know you’ve landed with the wheels up when it takes full power to taxi.

Having confidence that an aircraft’s mechanical systems and electrical components will function properly once it’s airborne is essential to mission completion and safety. Even more, knowing that a system like the Landing Gear Control Assembly is deploying the tricycle landing gear on the jet fighter is of life or death importance. Identifying an MRO source that provides repair support capabilities under budget and within time constraints is often a difficult task.

Duotech Services repairs the landing gear control assembly (NSN 1680-01-047-4185 P/N 16L401-801 AND 16L401-5) of the F-16 Fighting Falcon, like the one pictured above. Duotech provides repair services of electronic components for a variety of fixed wing and rotary wing aircraft systems. Duotech maintains an AS9100C registration and is a qualified repair station for thousands of items.

Get Fast Facts of the F-16 Fighting Falcon Infographic