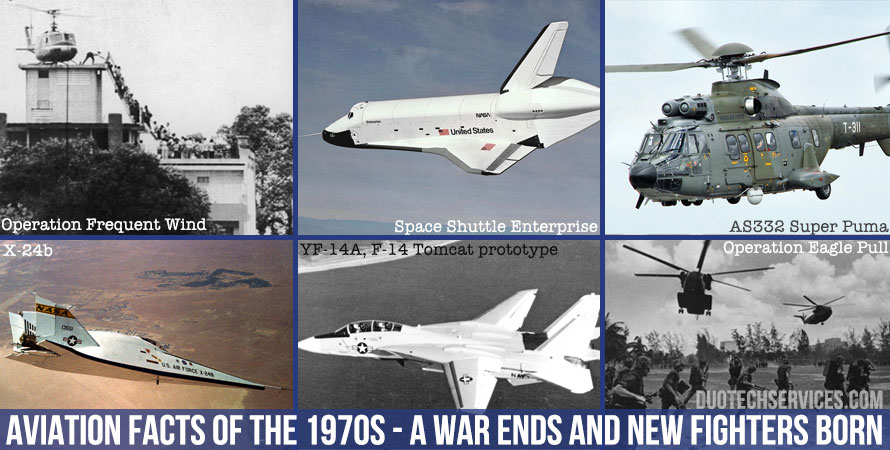 The 1970s – The Vietnam War would end but the Cold War continued the chess match between the United States and the Soviet Union. It was the decade when the F-18 Hornet, F-16 Fighting Falcon, F-15 Eagle, and the F-14 Tomcat would enter service. Today, all but the F-14 still command the skies. Not to be left behind, the Soviet Union would also have their first flights in the MiG-27, MiG-29, and the MiG-31.

Two things that aviation in the 70s had in common with the ’60s were hijackings and crashed aircraft. In fact, 1972 is listed as the deadliest year in commercial aviation history with 2373 people dying from aircraft crashes around the world. Aircraft hijackings also became commonplace between 1961 and 1972 with as many as 159 hijackings in the United States, most of them with Cuba as the destination. Because of this, mandatory security screening of all airline passengers would be required at all U.S. airports beginning in January 1973.

There were so many accidents and hijackings during this period that we chose to focus more on the 70’s aviation highlights like world records, first flights, big news moments, and aircraft innovations, like the ones listed below.

A Timeline of the Seventies in Aviation

Many of the aircraft that entered the service in the 70s are still in flight today. With aging aircraft like the F-4, F-18, F-15, F-16, P-3, E-2C, F-14, UH-60, OH-58, AH-1, and MH-53, keeping the airframes mission-ready requires identifying reliable, cost-effective component lifecycle solutions for electronic, mechanical, and electromechanical systems. Even with tight funding, electronic systems like the Identifying Friend or Foe (IFF) Transponders, radar, communication equipment, and weapons systems must be maintained to ensure mission-critical components are ready to keep those fighters in the air.

As a D-Level Maintenance facility and qualified repair station, Duotech provides Military Electronics Repair Services. Duotech provides a full range of military equipment repair services, including a wide variety of electronic and electromechanical systems, communications and RF, and power systems. With over 37 years of industry experience, Duotech Services, Inc. maintains an AS9100D and ISO 9001 certifications with the scope of repair, design, production (including CNC machining and laser cutting), testing and overhaul services.

Get Your F-16 Fighting Falcon Timeline