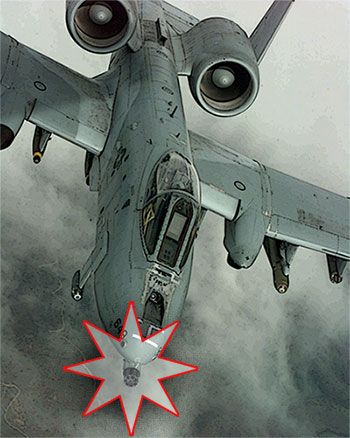 Click for Video The U.S. Air Force’s A-10 Warthog, officially called the Thunderbolt II, can carry a payload of rockets, missiles and bombs, but this fighter jet is basically a flying 30mm Gatling cannon. One of the most effective close-air-support platforms in the world, the A-10 is a welcome sight to ground troops engaged with hostiles. When the infantryman needs firepower laid down on a tree line or into a building to eliminate a threat, nothing beats the bbrrrrrrrrrrrt! sound that follows the light show of cannon fire.

The Warthog’s primary weapon is called the Avenger, the GAU-8/A Gatling-type seven-barrel cannon. A pilot fires the 30 MM rounds at a high rate of speed (3,900 rpm), in 2 second trigger pulls, also known as a “Combat Burst”. With a capacity of 1100 rounds, the pilot has approximately 9 trigger pulls at their disposal in a flight. The weapon has 7 rotating barrels, each one a whopping 7.5 feet long and weighing in at 70 pounds apiece. Add in a loaded ammo drum and feed system and the Avenger makes up 4000 pounds of the fighter jet’s combat air support load weight of 47,094 lbs.

In this week’s Jet Friday, we take a look at the behemoth 30 mm cannon of the Fairchild Republic A-10 Thunderbolt II. If you have never heard it fire the cannon before, you’ll soon know why we title this one, “9 Trigger Pulls of BRRRRRRRRRT”

Also check out Duotech’s article, “Four Factors that Make the A-10 Thunderbolt II Hard to Replace”