7 Fast Facts About the Mirage F1 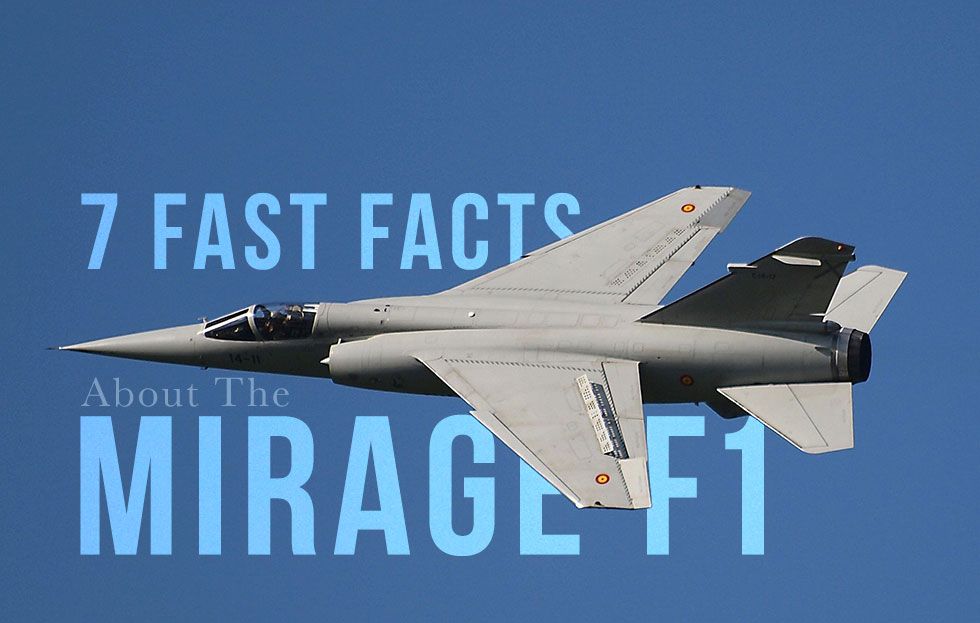 Flying low across the Chadian landscape, the two French Mirage F1 aircraft are hoping to see a radar signature from a radar station to their north. As they scream through the barren landscape, slipping between canyon rocks about 100 feet above the desert floor, a radar system starts emitting a signal. As the radar tries to locate a patrol plane the French were using as bait, the F1s screamed skyward, quickly gaining altitude to 600 feet, located the signal source, and fired their air-to-ground rockets directly onto the target.

Read about the actual event: “In 1987, the French Air Force Staged a Daring Raid on Libyan Defenses”

Designed to fill both the interceptor and ground attack roles for the French military, the Mirage F1 was introduced into service in 1973. The F1 was developed to replace the Mirage III, a lightweight, all-weather interceptor that served countries like France and Israel during the 1960s. Its design makes it perform very well at high-speeds at both low and high altitudes.

The Mirage F1 is a high-mounted, swept-wing multi-role aircraft powered by a single afterburning turbojet engine fed by two side intakes. The wing’s design and powerful engine provided the F1 the ability to take off on shorter runways.

With nearly 5 decades of service to fourteen militaries around the world, it was a premiere interceptor aircraft during the Cold War era. The Mirage F1 is currently employed by only four of those original operators, but today private companies utilize the platform as an aggressor aircraft.

7 Fast Facts About the Mirage F1

The Mirage F1 in Combat

The Mirage F1 was a very successful platform and served in many conflicts around the world. One of the first combat missions was when the French Air Force deployed Mirage F1s into Africa to intervene between Chad and Libya during Operation Manta in 1983 and 1984. Iraq used the F1 in their war against Iran intensively for interception, ground attack, and anti-shipping missions. During Desert Storm, many of these Mirage F1s were flown across the border to Iran who retained them in their air forces. The F1 has seen combat with Morocco, South African Air Force, and during Desert Storm by Qatari and French forces as part of the multinational forces.

Current US DoD contracts and RFQs in place will support contracted air services training for the next decade and will continue to grow in both size and scope. As warfare continues to evolve, so too will the threats from foreign aircraft manufacturers. These will include additional stealth, jamming, radar, and weapons, which US pilots must learn to both cope with and eliminate. By contracting the red air training to companies who privately own, operate, and advance these 3rd and 4th generation platforms, the US can constantly address pilot training shortfalls.

How Duotech is helping the Contracted Adversary Companies

Fighter squadrons face shortfalls in Adversary Air Support (AdAir) for combat training due to budgetary shortages and a lack of truly advanced threat replication. Duotech is providing low cost but highly capable RADAR that represents current threat capabilities. Jets equipped with Nemesis RADAR are the best AdAir solution in the market today, with an unrivaled combination of performance and growth potential. Duotech Services has designed a purpose-built RADAR to support the AdAir market by presenting a solution that is: