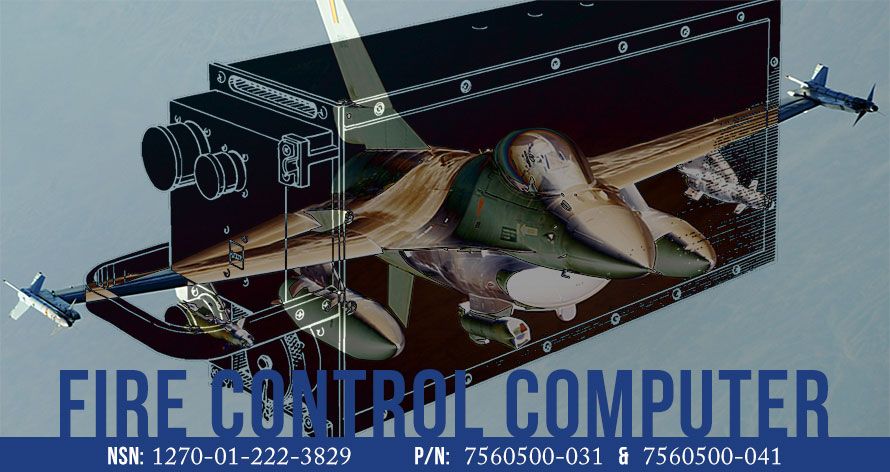 The Fire Control Computer (FCC) helps with navigation and aircraft management, but the primary purpose is to manage targeting in both air-to-air and air-to-ground attack modes. The FCC is modularly designed in three primary functional groups: the central processing unit (CPU), the magnetic memory (MM), and the input/output (I/O). Simply put, the magnetic memory is like a chalkboard, where the input/output writes the numbers it receives from various avionics systems and the radar system of the aircraft. The I/O communicates with the CPU, which then calculates a result using the numbers in MM. The CPU then tells the output the result, passing the information over a data bus to the proper receiving unit to be utilized by the aircraft and pilot.

The FCC implements the computations for nine major functions:

Technical Description: The FCC communicates with other avionics systems via a dual redundant multiplexed data bus. Whenever the FCC is off or incapable of performing the bus control function, a discrete is furnished to the inertial navigation set such that the bus control function is transferred to the inertial navigation set computer.

Layman Description: This means that there are two data buses. The FCC talks to other avionics systems over those buses. If the FCC fails, it turns off the switch that says it is in charge (a discrete signal, off the bus), and the navigation computer takes over. That way, the other avionics can keep working.

With such an important role to play in the aircraft’s survivability, keeping the FCC operational ready is critical to mission success. The F-16 Fighting Falcon’s Fire Control Computer is one of many systems that enable the fighter to maintain its superiority in air-to-air combat.

Duotech Services repairs the Fire Control Computer (p/n 7560500-041 and similar) of the F-16 Fighting Falcon, like the one pictured here. Duotech provides repair services of electronic components for a variety of fixed wing and rotary wing aircraft systems. Duotech maintains an AS9100C registration and is a qualified repair station for thousands of items.