First Flight of the SB-1 Defiant

The requirements from the U.S. Department of Defense for the FVL are that the aircraft must reach speeds of 260 mph while still maintaining an ability to hover and maneuver like a traditional helicopter. It also requires the FVL to carry up to 12 troops, operate in “high-hot” conditions at altitudes of 6,000 feet and have a combat radius of 263 mi. To be efficient and reduce costs, the winning platform will develop into a family of helicopters that share common hardware like avionics, engines, countermeasures, and sensors. As Military.com describes, the FVL will be able to perform missions of “cargo, utility, armed scout, attack, humanitarian assistance, medical evacuation, anti-submarine warfare, anti-surface warfare, land/sea search and rescue, special warfare support, vertical replenishment, airborne mine countermeasures, and others, Army officials said.”

With the lift stability of its coaxial rotors and pusher propeller, the SB-1 is expected to reach speeds of 290 mph, 100 mph faster than the UH-60 Black Hawk. It will have an estimated combat radius of 690 miles and carry 4 crew and 12 combat-equipped troops. 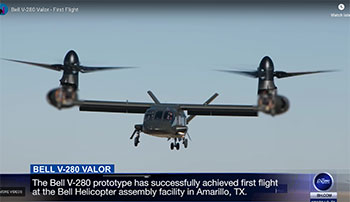 The Defiant is competing with the V-280 Valor tiltrotor entry from Bell Helicopter. The V-280 achieved its first flight on December 18, 2017. Since then the V-280 has conducted forward flight at 287 MPH and reached several other milestones. The Valor is expected to produce an estimated combat radius between 575-900 miles, carry 4 crew and 14 combat-equipped troops, and have a cruising speed of 322 mph.

Below are first flight videos of both entries into the Future Vertical Lift program.