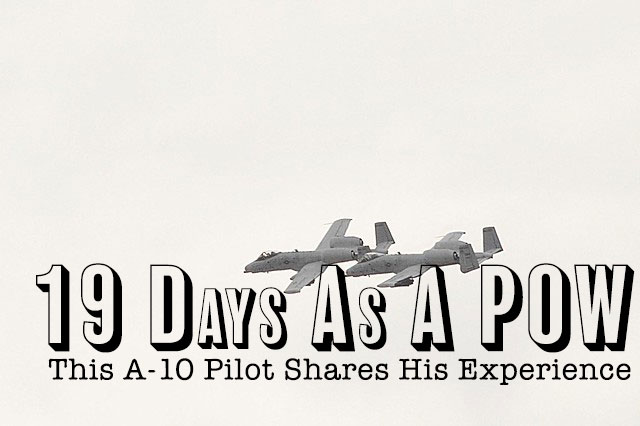 A flight of two A-10 Thunderbolt IIs, piloted by then 1st Lieutenant Rob “Sweetness” Sweet and his flight commander, Captain Stephen R. Phillis, crossed the northern border of Kuwait headed farther into Iraq than any A-10 had gone before. Both men were graduates of the U.S. Air Force Academy (USAFA) and assigned to the 353rd Tactical Fighter Squadron “Black Panthers”, then based out of Myrtle Beach, S.C.
The flight crossed the border at about 4 pm on Feb 15, 1991. The mission would be Rob Sweet’s 30th during Desert Storm. They were going after tanks of the Republican Guard about 80 miles inside Iraq. So, if they got into trouble, help would not be close by.

The flight had just dropped their bombs when Sweet’s plane was engaged by a SA-13 ‘Gopher’ surface-to-air missile (SAM). The missile missed Sweet’s plane but they saw where it was fired from. They immediately turned to attack the SAM site when Sweet felt his aircraft get hit and saw one of his wings erupt in flames. He was hit at 12,000 feet and fought to control the aircraft as he headed back south to get to safety. At 6,500 feet, he realized he lost complete control of the A-10 and knew he could not save it so he had to eject.

With the pull of the ejection handle, he felt a jolt as he was launched from the cockpit. Successfully ejecting from the stricken aircraft, he found himself hanging in his chute as he drifted quietly down to earth. His next problem presented itself below. He would land amongst the Republic Guard tanks that he had just attacked. About 200 men were waiting on him below and they did not look happy. The welcoming party would be very violent.

When Sweet radioed Captain Phillis that he had been hit and was ejecting, Phillis turned back to help identify where Sweet landed so a rescue mission could be launched. But, Phillis’ plane would be hit returning to Sweet’s location. His aircraft lost control so quickly that Captain Phillis would not have enough time to eject. The Air Force did not find wreckage and details were unclear of his crash and his outcome so there was hope that he was also a POW. When he was not one of the other approximately 30 prisoners released 19 days later it was determined Phillis had perished in the crash.

Below is a link to an interview 1st Lt Robert Sweet gave to People Magazine published May 30, 1991. In it, he would recount the demise of his aircraft and his POW experience over those 19 days.