RADAR stands for Radio Detection And Ranging. A radar system detects aircraft, ships, or other objects and the speed and direction in which they travel by sending out a pulse of high-frequency electromagnetic waves. This pulse goes out until it encounters an object and reflects off of it. The signal then returns to the radar’s antenna for processing where it can then determine the angle, distance, direction, and speed of a target. A radar can track that target while searching for more objects.

Since Great Britain’s Chain Home Radar, the first early warning radar network in the world, radar systems have become essential for defense by early detection of targets on land and in the air. Radar systems give advanced notice of a hostile enemy approaching so interceptor aircraft or missiles can be launched for defense.

Early aircraft did not have radar systems. Pilots relied on visual detection of hostile aircraft or ground and sea targets. After WWII, the early First Generation jet fighters still relied on machine guns and cannons as their primary weapons. This limited engagements to be within visual range.

The first radar in aircraft allowed for the detection of enemy planes beyond visual range and was dedicated to interceptors and night fighters only. Often these systems required a committed radar operator. At the end of the First Generation jet fighters and some of the early Second Generation, aircraft began to use radar to direct Infrared (IR) guided missiles like the AIM-7 Sparrows rockets onto a target. The IR missile was limited to close range combat and usually from behind. In the early 1950s, radar systems started providing radar-guided (RF) missile capability to jet fighters but were proven unreliable. After being targeted by the launching aircraft’s onboard radar, these long-range RF missiles could track and intercept an enemy aircraft, providing a beyond-visual-range combat capability.

As onboard radar systems became more sophisticated in third and fourth generation aircraft, radars like the F-5’s APQ-159 and the F-16’s APG-66/68 saw an increase in air-to-air stand-off ranges, look-down capability, air-to-ground laser tracking for more precise bomb delivery, and all-weather operation and ground mapping. Though these radars became much more capable hunters, they still required mechanical systems to point the antenna, making it susceptible to mechanical failures. 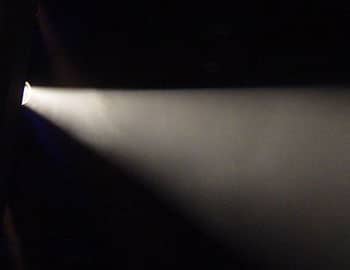 A radio beam from a radar system of an APG-68 radar system is like having a flashlight in your hand. When you want to illuminate an area ahead then you move your hand back and forth or up and down to guide the beam. If you want to scan that same area much quicker all while shining your beam directly on multiple spots simultaneously, then you need to develop a more efficient system like a PESA or an AESA.

Both modern AESA and PESA are generally pulse radars. A pulse radar is a system that transmits short, powerful pulses of radio energy and then between those pulses listens for a return produced from a reflection of that wave off an object. Using the doppler spectrum, the return is then evaluated to determine distance and speed of the target in relation to the radar. Both AESA and PESA can quickly shift their operating frequency to avoid electronic jamming or the radar system being located through radio direction finding. This frequency agility also eliminates interference from friendly sources or natural effects from the atmosphere. Both have narrow and wideband modes and can be used for electronic countermeasures (ECM) as well as passive scanning.

Fifth-generation fighters like the F-22 and F-35 are equipped with AESA radar systems. There are Fourth-generation fighters like the F-16 that are updating their OEM pulse doppler radars to solid state technology. They also may choose to replace those mechanically scanned systems with affordable AESA radar systems like the ARES Radar. These optional upgrades make a formidable all-weather, multi-mission fighter like the F-16 Fighting Falcon even more deadly and difficult to detect.