Jet Friday: Video of Insane Footage Takes You Inside the Cockpit 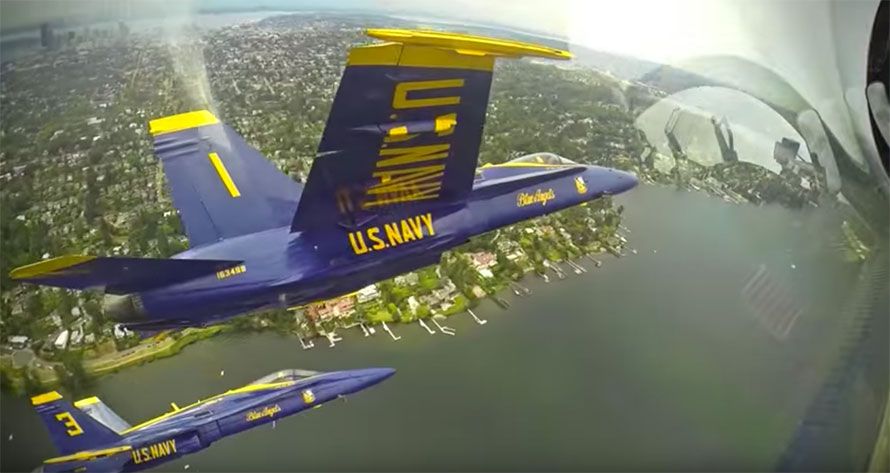 Watch Video Below Many videos exist of journalists or celebrities taking part in a fighter jet ride-along with the United States military. Many of these videos include a camera pointed at the passenger to see their reaction during the flight, but most importantly, whether they pass out or not.

This video below is one our favorites of the U.S. Navy’s Blue Angels performing at Seafair, an annual air show in Seattle, Washington. The video is recorded from inside the cockpit of the Slot Pilot’s aircraft, or #4 on the team. The perspective alternates between the view outside the canopy, demonstrating how close the F-18 Hornets operate during formation aerobatics, and the guest rear occupant, Lieutenant Commander (LCDR) Jim Hiltz of the United States Coast Guard. LCDR Hiltz performs the breathing techniques pilots and guests riders learn to avoid blacking out during the high-G maneuvers. These breathing techniques allow Hiltz to avoid passing out, even though at 1:20 into the video he does point out he experienced some of the tunnel vision that occurs before passing out.

If you love Jet Aircraft like we do and want to see more videos and posts about jets, click this link to see our Jet Friday articles. Also, download for FREE each of our F-16 Fighting Falcon infographics. One of the infographics includes facts about the F-16 and the other features the timeline of the F-16.

BLUE ANGELS – Insane Footage Takes You Inside the Cockpit