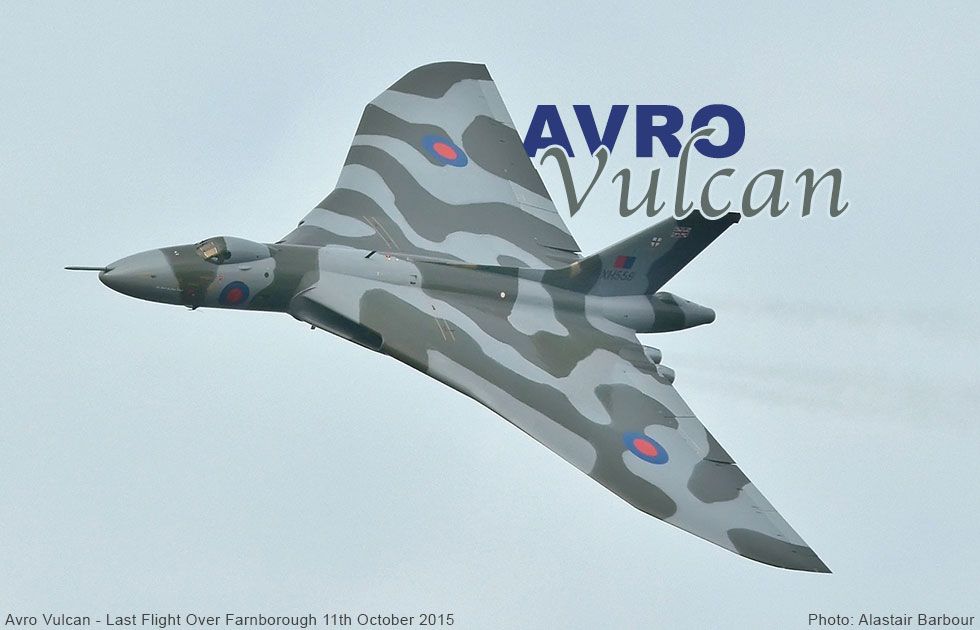 The Avro Vulcan – a uniquely shaped aircraft that was birthed as a high-altitude strategic bomber for the Royal Air Force (RAF) of the United Kingdom. With the growing concern of the Soviet Union in the Cold War, there was a need in 1947 for the RAF to develop a four-engined nuclear-capable bomber as a deterrence to the Soviet Union. The requirement put forth by the RAF was for a bomber with a top speed of 500 knots (930 km/h), an operating ceiling of 50,000 ft (15,000 m), a range of 3,000 nautical miles (5500 km), and a bomb load of 10,000 lb (approx 4,550 kg). This would permit an aircraft departing from the UK to deliver a nuclear missile deep into Soviet territory. 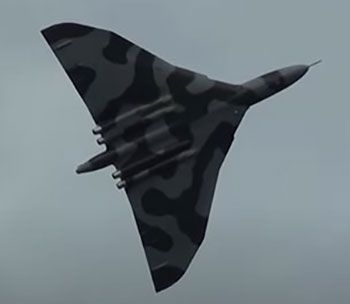 Avro Vulcan creates a very unique silhouette in the sky

Meeting the British Air Ministry’s specifications, the Vulcan would experience its first flight in August of 1952 and then be introduced into service in 1956. At 99 feet long and a delta wing with a span of 111 feet wide, it created a very unique silhouette in the sky. The Vulcan’s engines produced 11,000 lbf of thrust each. This powered the Vulcan to a maximum speed of 646 mph (Mach 0.96) while its cruising speed at 45,000ft was 567 mph. It had a service ceiling of 55,000 ft and a range of 2,607 miles. The Vulcan had a five-man crew that consisted of a pilot, co-pilot, Air Electronics Officer (AEO), Navigator Radar, and the Navigator Plotter. With its nuclear payload mission role, the Vulcan’s paint scheme was often antiflash white as shown in the picture. This was designed to help protect the crew from the thermal radiation emitted by a nuclear explosion beneath. 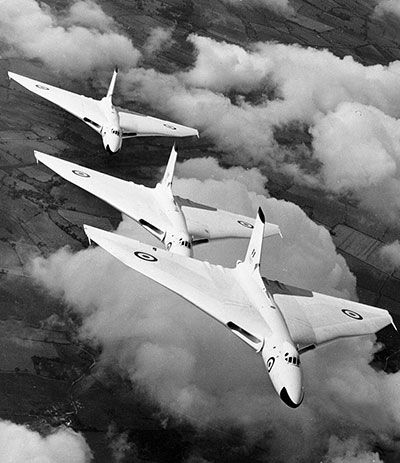 Early in its operational life, its primary means of avoiding interception was high-altitude flight and speed. In the mid-1960s, the Vulcan’s vulnerability to being shot down like the CIA’s U-2 plane, which flew 20,000 feet higher than the Vulcan, resulted in the B.2 high-altitude flying tactics being moved down much closer to the earth. The low-flying altitude was typically just 500 feet elevation to stay below Russian radar systems. But the airframe of the Vulcan was not developed to withstand high-speed low-level flight and it suffered terrible metal fatigue. Due to this, the Vulcan would again have its roll changed, this time to maritime reconnaissance and refueling tanker. It would serve as tanker refueler until 1965.

In 1956, while still primarily in a strategic bomber role, the Avro Vulcan joined with other convention bombers to attack Egyptian airfields.

During the Falklands War in 1982, Operation Black Buck would become the Vulcan’s only ‘wartime’ mission. At nearly 7,800 miles, the Avro Vulcan set the record for the longest-ranged bombing raid in history at that time. The Royal Air Force utilized the Vulcan to seven ground attack missions where conventional bombs were dropped on Port Stanley Airport against occupying Argentine military forces. Though the bombings caused little damage to the runways, it did encourage Argentina to hold back its air defense fighters to their mainland for defense.

In its final years, six Vulcans were designated as Avro 698 Vulcan K.2. It was reconfigured to be aerial refuelers and outfitted with large tanks in its weapons bay. The aircraft was retired from service with the Royal Air Force in 1984.

One Vulcan B2 XM558, named The Spirit of Great Britain, was privately restored in 2007 to perform as part of display flights. Finally, in 2015, due to the scarcity of parts and the hours on the airframe, the plane would be officially retired, again.

Duotech Services – A qualified Depot Level Maintenance (D-Level) facility can eliminate the need to scrap repairable equipment by identifying the faults in malfunctioning equipment and repairing them quickly. With aging equipment, supporting technical data can be nonexistent, stopping repairs in their tracks. Finding a qualified depot that has the ability to reverse engineer obsolete technology and manufacture unavailable parts is essential to returning functional mission-critical systems back to aircraft and ground systems.