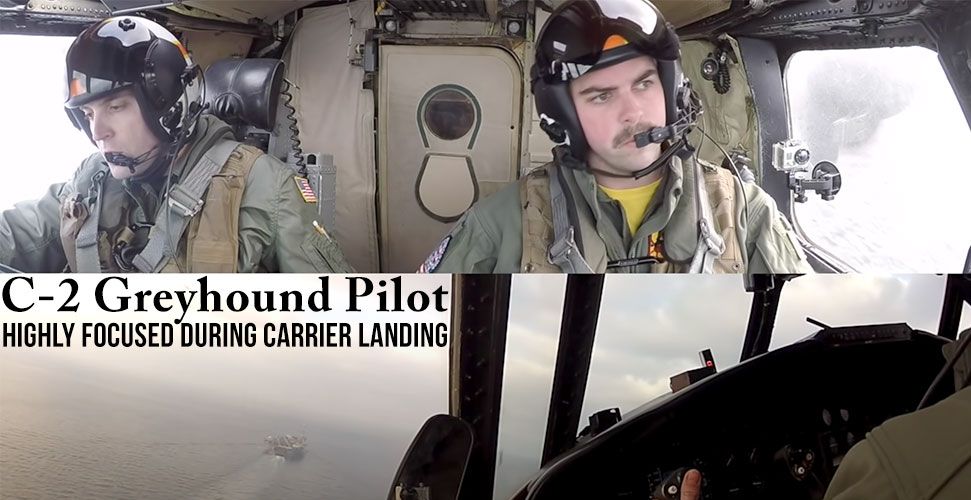 Any time a Naval Aviator is approaching the back of a carrier they are attempting to perform one of the most dangerous jobs in the U.S. military – landing on it. It takes nerves of steel and intense concentration to bring a fast-moving aircraft like the F-18 Super Hornet safely to a stop on a short runway that is pitching back and forth on the ocean. The carrier runway is narrow and often surrounded by other aircraft stationed for operations.

Training Naval Aviators in Carrier Operations in the T-45 Goshawk

With the 81 foot wingspan of the C-2 Greyhound, compared to the F-18 Hornet’s 37 feet wingspan, landing this wide aircraft onto a crowded deck can be even more dangerous. The C-2 Greyhound is the Navy’s Carrier Onboard Delivery (COD) aircraft, bringing morale lifting cargo like mail, transporting ship’s personnel or dignitaries to and from shore, or delivering important parts like a repaired jet engine.

How much focus does it take to land one of the widest carrier-based aircraft? You can see an example of how dangerous a landing can be during rough seas when a Greyhound carrying Argentine VIPs nearly falls off the ship after barely catching an arresting cable.

The Focus of a C-2 Greyhound Pilot

In this video below by the C-2 Naval Aviator Rob Roy, you see a split-screen of the short approach to the USS Harry S. Truman aircraft carrier. Roy is focused on flying the ball, a traffic light looking system onboard the carrier lets a pilot know if they are on the proper glide slope to catch an arresting cable or will crash into the back of the ship. The bright amber light that resembles a meatball is referred to as ‘the ball’. This extra video also shared by Rob Roy shows another C-2 landing where he makes three attempts to land. On his first attempt, he misses an arresting cable (a bolter), his second attempt is waved off, and finally on his third attempt lands on the carrier.

Navy Pilot DOESN’T EVEN BLINK While Flying The Ball

Duotech specializes in repairing obsolete equipment that the OEMs no longer support, or, if they do, the repair comes at a cost well over repair percentage guidelines. We repair obsolete equipment at a lower cost and with a shorter turnaround time.

Instead of scrapping repairable equipment, we offer you solutions to keep your legacy aircraft in the air and your obsolete mission-critical equipment functioning.