OTD 75 Years Ago They Prepared. Tomorrow They Would Make History. 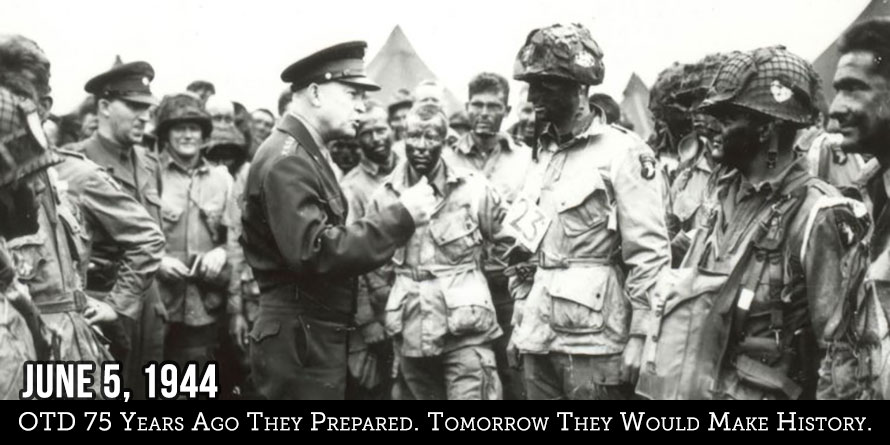 On this day, 75 years ago, 2,876,000 men were preparing their minds and souls for the journey they were about to begin. It was June 5, 1944, in southern England, and this was the original target date of Operation Overlord, the Allied Invasion of Normandy. Bad weather leading up to this date had pushed the landing date back 24 hours.

Imagine the thoughts running through their minds, the prayers escaping from the lips of these men who were farmers, teachers, mechanics, businessmen, factory workers, high school and college-age kids from all around the world. They were their own melting pot of American, British, Canadian, Australian, French, Polish, and more. These men are/were our fathers, grandfathers, great-grandfathers and soon they would forever be associated with names like Omaha, Utah, Sword, Juno, and Gold.

Through the day they would occupy their minds by eating, checking their gear, cleaning weapons, playing cards, sneaking in a nap, reading and writing letters, smoking and joking with buddies, and finalizing any official documents. Back home they left behind moms, dads, sisters, brothers, wives, girlfriends, and lives that were just ready to get started. That afternoon they would load themselves and their equipment onto more than 4,000 ships or be part of the crew of more than 1200 aircraft. Within 48 hours, 4,414 of these men would never begin those young lives back home.

Across the English Channel lay 2,400 miles of fortified beachhead covered by bunkers, landmines, and water obstacles. Beyond hundreds of yards of deadly beaches and seawalls lay towns, houses, buildings, churches, fields, streets, hedgerows and treelines where many thousands of these 2,876,000 men would find their end. Inside, they were anxious about what they knew to expect the next day. But even more, they were frightened about what they did not know.

Before dawn on this June 5th day, General Dwight D. Eisenhower, commander of Operation Overlord, decided to proceed with the assault on June 6, as the weather was expected to be clear. To encourage all the Allied soldiers, he penned this note, which would become the Order of the Day and distributed to every man. 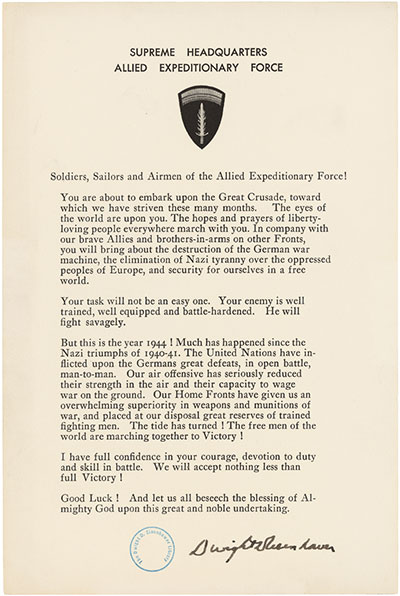 “Soldiers, Sailors and Airmen of the Allied Expeditionary Force!

You are about to embark upon the Great Crusade, toward which we have striven these many months. The eyes of the world are upon you. The hope and prayers of liberty-loving people everywhere march with you. In company with our brave Allies and brothers-in-arms on other Fronts, you will bring about the destruction of the German war machine, the elimination of Nazi tyranny over the oppressed peoples of Europe, and security for ourselves in a free world.

Your task will not be an easy one. Your enemy is well trained, well equipped and battle-hardened. He will fight savagely.

But this is the year 1944! Much has happened since the Nazi triumphs of 1940-41. The United Nations have inflicted upon the Germans great defeats, in open battle, man-to-man. Our air offensive has seriously reduced their strength in the air and their capacity to wage war on the ground. Our Home Fronts have given us an overwhelming superiority in weapons and munitions of war, and placed at our disposal great reserves of trained fighting men. The tide has turned! The free men of the world are marching together to Victory!

I have full confidence in your courage, devotion to duty and skill in battle. We will accept nothing less than full Victory!

Good luck! And let us beseech the blessing of Almighty God upon this great and noble undertaking.”

75 years ago today, 2,876,000 were preparing for that Great Crusade. Tomorrow, 150,000 of the Greatest Generation make history on the shores of Normandy.