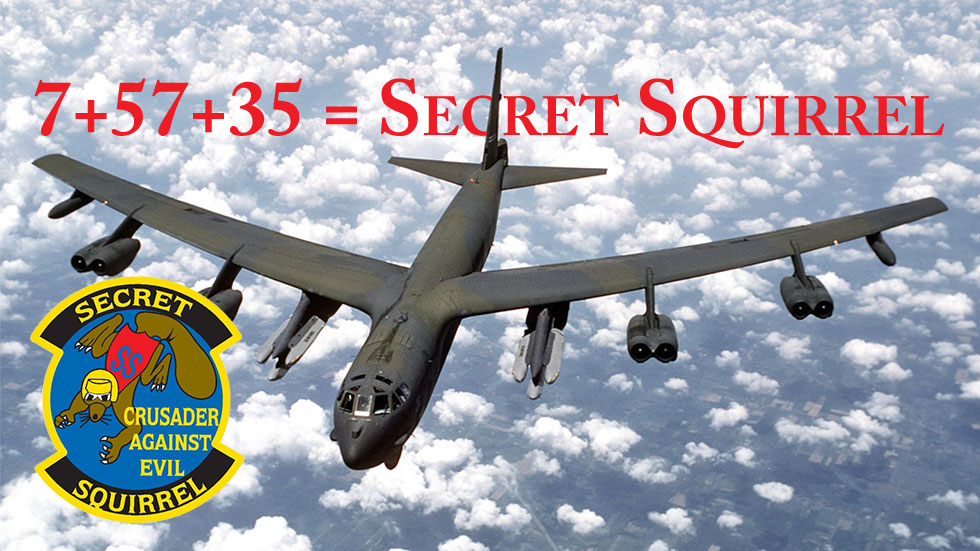 January 15, 1991 was an important day in history, though most people may not recall what made the date significant. This was the official deadline given to Iraq to withdraw its forces from Kuwait, which it had invaded on August 2, 1990. The deadline was mandated by the United Nations Security Council in Resolution 678. While the deadline approached, a coalition of governments from around the world amassed nearly 1 million troops inside Saudi Arabia along the border of Iraq and Kuwait. This effort was to deter Iraq from invading Saudi Arabia and to prepare for the time when the world needed to push Iraq out of Kuwait. The January 15 deadline would pass with Iraq defiantly holding on to Kuwait.

In the very early morning hours of January 16, 1991, members of the United States Air Force 2nd Bomber Wing, 596th Bomb Squadron, were ordered to their staged aircraft. They would be expected to now perform the mission they had secretly trained for since the time Iraq had invaded Kuwait.

The 57 crew members would man seven B-52G Stratofortresses that would launch from Barksdale Air Force Base in Louisianna. This secret mission would last 35 hours and require a round-trip flight to Iraq and back totaling 14,000 miles. The mission needed 4 inflight refuelings to accomplish the mission. It would be the longest aircraft combat sortie of its time. As the crew trained since August of 1990, only a select group of aircrew and maintainers from the 596th Bomb Squadron (BS) and a few need-to-know military members outside the squadron would be aware of the mission. The operation would remain classified until January 16, 1992.

The B-52 is a long-range subsonic strategic bomber. It is known in the B-52 community as BUFF, the Big Ugly Fat Fellow. It was introduced into service in 1955 and is still in active duty today with the U.S. Air Force. It is powered by eight turbofan engines that produce 17,000 lbf each. The cruising speed is 650 mph with a combat radius of 8,800 miles. The service ceiling for the B-52 is 50,000 ft. Between 1952 and 1962 there were 750 bombers produced. It has a payload capability of 70,000 pounds of mixed ordnance of bombs, mines, and missiles. It has carried more than just bombs over its 60+ decades. It has hauled everything from drones, components of the space shuttle, cruise missiles, and nuclear bombs. It broke 11 distance and speed records in January of 1962 when it flew nonstop from Japan to Spain without refueling. The B-52 has served over the jungles during the Vietnam War, the Iraq deserts during Desert Storm, over Afghanistan in 2001, and in 2003 in Operation Iraqi Freedom. The B-52 is still active and strikes fear around the world. It is used as a deterrent by just being stationed near a theater with its potential damage to an enemy’s infrastructure.

To initiate Operation Desert Storm, the B-52’s would be used as a first-strike weapon against Iraq. These bombers would be the first aircraft to deliver air-launched cruise missiles. These AGM-86C Conventional Air-Launched Cruise Missiles were GPS guided to put the missile precisely onto their target even if the target was obscured by clouds or smoke. Desert Storm would be the first war where GPS was used to guide aircraft, weapons, tanks, and troops across the featureless desert sands. This use of new technology is why some historians refer to Desert Storm as “the first space war.”

This secret mission was officially called “Operation Senior Surprise”, but to that select group of aircrew and maintainers it became known as Secret Squirrel. Their mission was to launch 35 cruise missiles and deliver a crushing blow to critical Iraqi command and control targets deep inside enemy territory. This attack would blind Iraq’s commanders and deny them intelligence of how many allied aircraft were flying and what direction they were headed and what targets were attacked. As soon as Iraq was blinded by Secret Squirrels’ strikes, General Schwarzkopf, U.S. Commander in the Gulf War, shifted seven divisions of troops from along the Kuwait border and further west into Saudi Arabia. This would allow the allies to be in a position to envelop the Iraqi troops when the ground war started and destroy them before they escaped.

Below are two short videos about Secret Squirrel. Below those two links is an infographic that illustrates this unique mission that kicked off Operation Desert Storm. 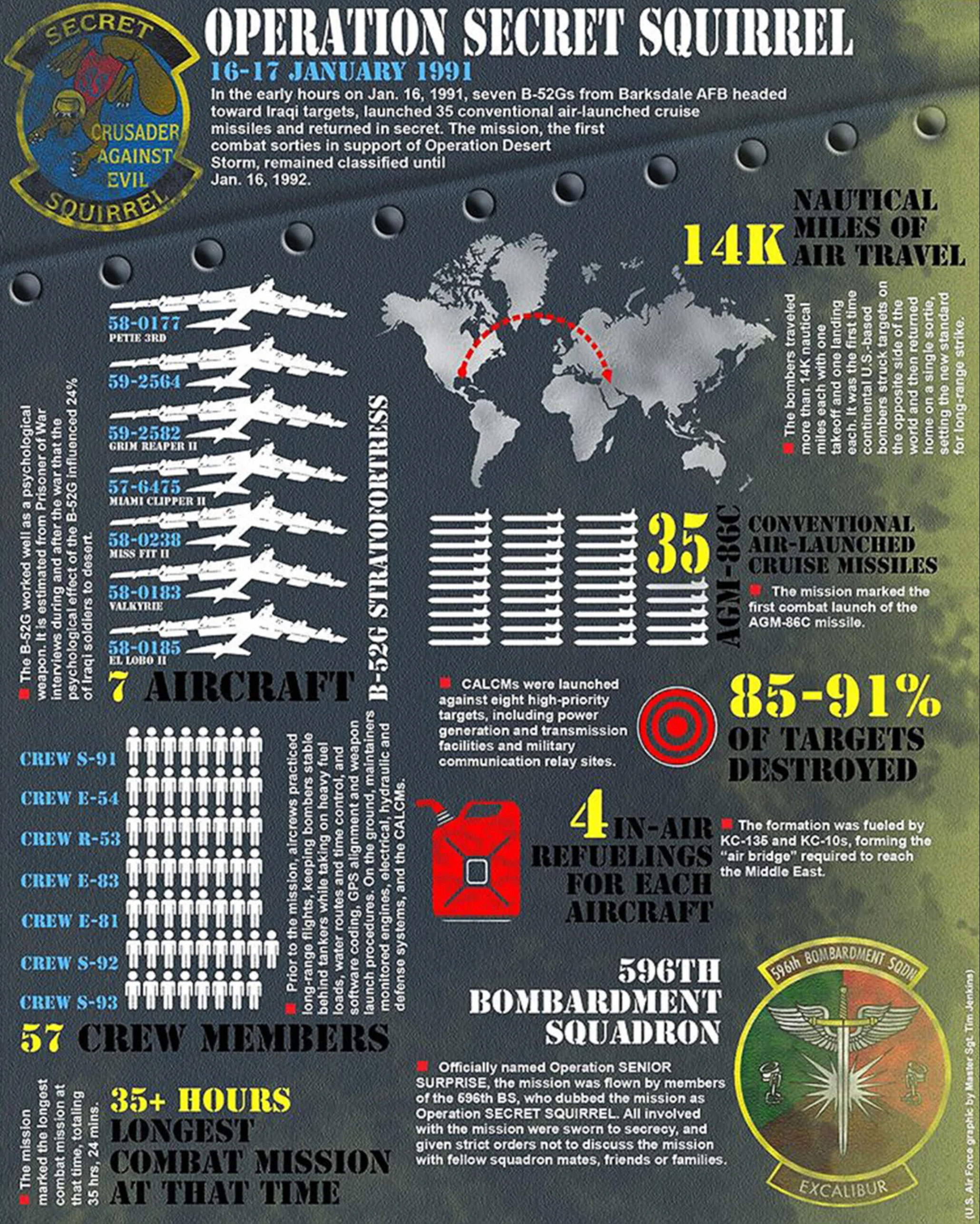