Jet Friday: This Aircraft Shot Its Ownself Down 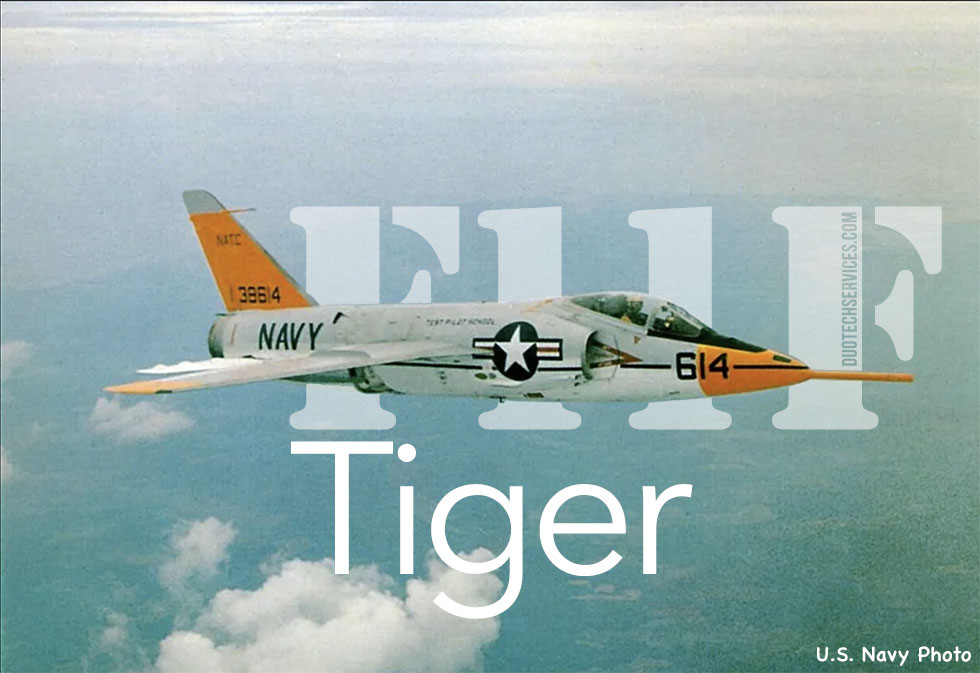 In early 1956, the United States Navy began testing a new single-seat supersonic fighter, the F11F Tiger. This new carrier-based aircraft was expected to be an upgraded replacement for the Navy’s first carrier-based fighter, the F9F Panther/Cougar, which was also Grumman’s first jet fighter. The Panther was a straight wing jet aircraft with a top speed of 575 mph. After increasing thrust and adding swept wings, the F9F Panther would be redesignated the F9F Cougar and have a top speed of 647 mph.

The F-9F Tiger would be replaced by both the F11F Tiger and the F8U Crusader. The F11F Tiger was a result of Grumman’s attempt to modernize their Cougar. For its time, the lightweight fighter F11F aircraft was a superior performing aircraft that could exceed Mach 1.1 at 843 MPH. It was Grumman’s first supersonic aircraft and this new speed capability would lead to a unique test flight incident.

On September 21, 1956, a test pilot took an F11F up into the sky off the coast of Long Island. One of the goals of the flight was to test the jet’s 20mm cannon while flying at Mach 1. On its second run, beginning at an elevation of 20,000 feet, the pilot entered a shallow dive, targeting an open space of ocean. At 13,000 feet he fired the cannon in four short bursts while using the afterburner.

The pilot continued to descend after firing and at 7,000 feet witnessed the F11F’s armored windshield get struck and dented by an unknown object. He immediately slowed the aircraft to avoid the canopy caving in and turned back to the airfield. The only other damage the pilot could see was a gash on the right intake lip. When he would attempt to push the power above 78% the engine would run rough.

He was two miles out from the runway and at 1200 feet with wheels and flaps down when he realized that at only 78% power he could not maintain his glide path and his sink rate was increasing. He chose to power up to full throttle to make the runway but came up short by ¾ of a mile after the engine destroyed itself and he lost all power. He entered the tree line and slid 300 feet before coming to a stop. Though his aircraft was on fire, he managed to escape with minor injuries and hopped a flight in a helicopter to the hospital for evaluation.

When the aircraft was inspected, it was discovered that the F11F had been struck by three 20 mm rounds, one in the canopy, one at the intake, and one in the nose cone. Fragments from the intake strike were found inside the jet engine’s first compressor stage and more damage discovered to the fan blade. When the pilot fired his first burst, he was in a shallow supersonic dive. After firing, his downward angle and speed increase eventually put him directly under the path of the falling rounds. He had shot his own plane down in a matter of seconds.

Under the new naming convention of all U.S. aircraft in 1962, the F11F was redesignated the F-11. The F-11 would have a short lifespan. Introduced in 1956, the F-11 would be pulled from front line service by just 1962 because of the performance of the F-8 Crusader and F-4 Phantom. The U.S. Navy’s Blue Angels would utilize the F-11 Tiger as their performance aircraft until 1969 when it would also be replaced by the F-4 Phantom.

Enjoy this #JetFriday video and have a great Friday! See all our Jet Friday posts. If you enjoy it, please share it with friends and colleagues.