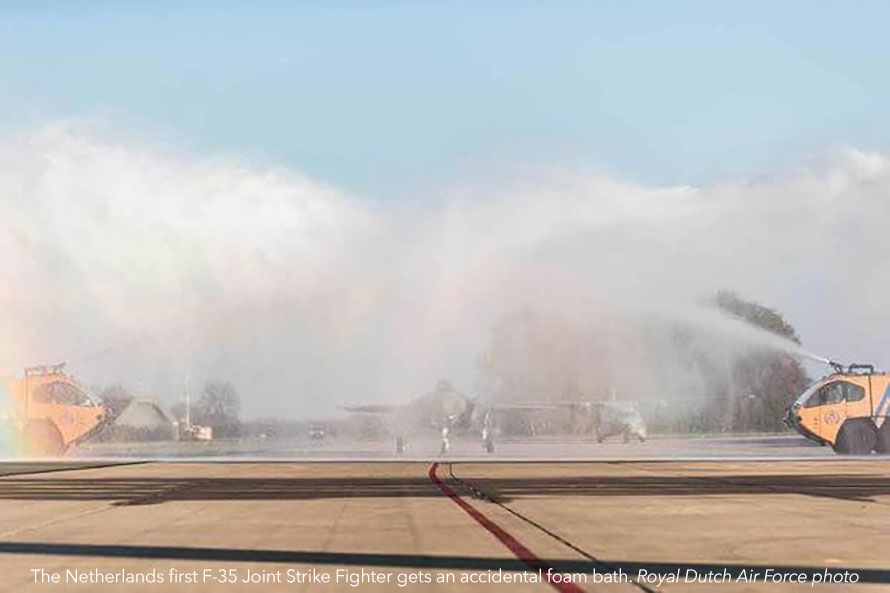 How do you celebrate your country’s first permanently stationed F-35A Lightning II? The Netherlands did it with a bubble bath.

To be clear, the Royal Netherlands Air Force did not do this intentionally.

The Dutch are expecting to replace their fleet of F-16 Fighting Falcon with the new F-35. Currently, they have 60 F-16s in service and plan to buy a total of 46 F-35s. The Royal Netherlands Air Force currently owns eight of the fifth-generation stealth multirole fighter aircraft but they are currently in the United States and used to train the Dutch pilots. This F-35 was to be the first to be permanently based in the country. It was arriving from its final assembly in Italy to the Leeuwarden Air Base.

After flying a celebratory lap circling the airbase, the pilot set up for its final approach and smoothly landed the cutting edge aircraft. Part of the celebration would include a traditional water cannon salute provided by two E-ONE fire trucks. The two fire trucks were on standby for the event when they needed to address an emergency with an F-16. The F-16 issue required the trucks to be ready with fire-extinguishing foam. When they returned to prepare for the salute someone obviously forgot to switch back from foam spray to water. The F-35 landed and rolled through the foam spray on its way to a waiting crowd.

It did not dampen the spirits of the celebration and, despite the bubble dripping off the aircraft as the pilot climbed down, nobody mentioned the error. It was reported that afterward the trucks used plain water to spray off the F-35.

Watch a short clip below shared by Ank Bejleveld on Twitter