[Watch Video Below] It takes steady hand-eye coordination, great situational awareness, and lots of training to perform formation flying like in the video below. Military pilots conduct formation flying for the purpose of concentrating firepower, strengthening the defense of the flight, and reducing energy usage for all airplanes behind the leader. 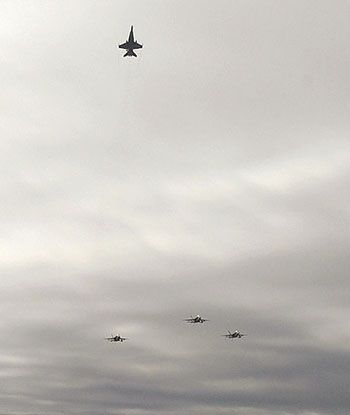 Small formation flying may also be part of a pre-game flyover before a sporting event, when observing Memorial or Veterans day ceremonies, or during an airshow. When performing a salute at a funeral or memorial event, a flight may conduct the Missing Man formation. This is commonly executed with four aircraft flying low over a ceremony in V-formation. As they pass over, one aircraft abruptly pulls up out of formation while the remainder of the flight continues at level flight, leaving a space in the formation representing the honored person. (Img. 1)

Also read: Turned Back by the F-15 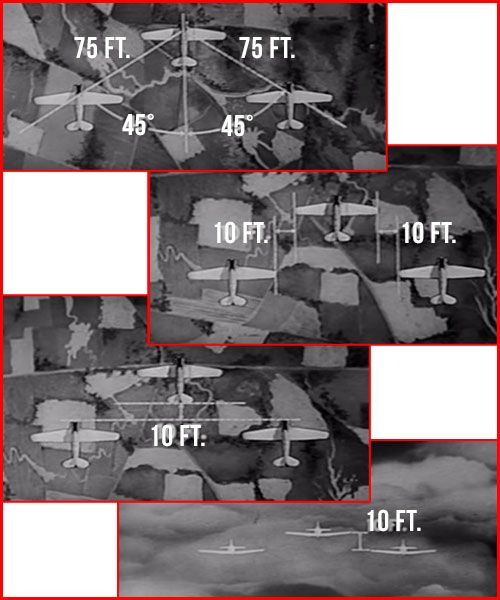 According to the Fundamentals of Formation Flying, the proper distance between corresponding aircraft of the wingman and leader is 75 ft. The wingman’s aircraft should be at a 45 degree bearing from the leaders. (Img. 2) The wingman’s wingtip should be 10 feet laterally from the wing tip of the leader, and the nose should be ten feet aft of the leader’s tail. Aircraft flying in tight formation do not normally fly at the same altitude. Again, the fundamentals suggest that a wingman be 10 feet below the leader of a flight.

In this video of an F-15 flight in tight formation, one flight crew member films their wingman. They are not observing the same distances as is directed above in the U.S. Navy training film from 1953. This may be because of filming purposes, or possibly that with faster jet aircraft, minimal distances between fighter aircraft have evolved.