In 1926, the Distinguished Flying Cross (DFC), a military decoration awarded to any officer or enlisted member of the United States military who distinguish themselves through heroism or extraordinary achievement that is clearly distinctive involving operations during aerial flight that are not routine, was formally introduced. Though it has been reserved for members of the military, a few civilians like the Wright Brothers and Amelia Earhart have been awarded the DFC. Awarding the DFC to civilians ended following an executive order in 1927.

The first person presented the Distinguished Flying Cross medal was Charles A. Lindbergh. A Captain in the U.S. Army Air Service, Lindbergh was awarded the DFC for his historic non-stop solo flight from New York’s Long Island to Paris, France. 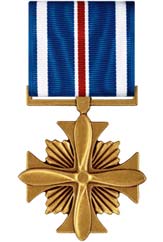 In precedence, the Distinguished Flying Cross is lower (worn after) than the Legion of Merit but higher (worn before) than Soldier’s Medal, Navy Marine Corps medal, Airman’s Medal and the Coast Guard Medal. The DFC medal is a bronze four-bladed propeller contained within a cross suspended from a straight bar hanging from a blue ribbon that has white stripes and a red stripe in the center. Following the first award, additional awards are identified by bronze of silver oak leafs, and gold or silver stars, depending on the service branch. If awarded for valor in combat, members in the Air Force, Navy, and Marine Corps, may be authorized to wear a letter “V” on the DFC.

Though it is unknown how many DFCs have been awarded over the decades, there are over 6,200 members of the Distinguished Flying Cross Society. That organization claims there may be thousands more that are not currently members.

We have chosen a few members from each service and other notable examples of DFC recipients and included them below. There are many more, and if you are looking for someone specific, try the link at the bottom of this article to the Military Time’s Wall of Valor. 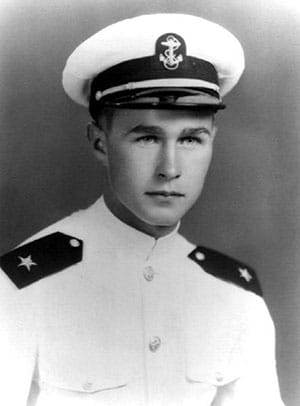 President of the United States

To find a specific person who has been awarded the DFC, you may find them through a search on the Military Times, “Wall of Valor”