Communication Among the Flight and Mission Crew of an AWACS Aircraft

An AWACS aircraft is circling above a battlefield where three different units are closing in on a small village. The ground units are tasked with bringing in a local Taliban villager who leads a band of men who attack military supply convoys throughout a nearby city. The Boeing E-3A Sentry Airborne Warning & Control System (AWACS) is tasked with providing any support necessary to get the ground units back to base alive.

At 32,000 feet and cruising through the early morning blue skies at 450 mph, the AWACS aircraft maintains surveillance of 120,000 square miles of airspace. It easily identifies multiple aircraft as friend or foe and can direct fighter-interceptor aircraft to any enemy targets.

The Sentry is designed to loiter over a station like the battleground above for eight hours, monitoring communication between friendly forces and directing close air support and other necessary air operations over the airspace. This time can be extended with aerial refueling and onboard crew sleeping areas. The Sentry will also detect and track ships and vehicles at very long ranges. 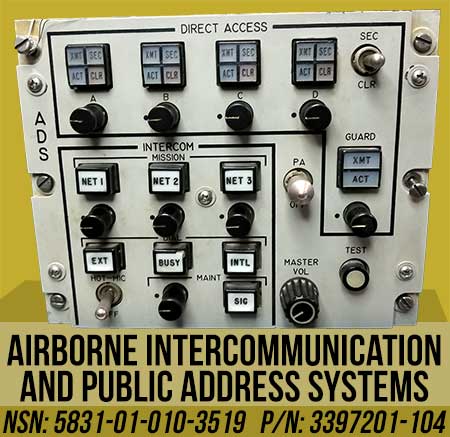 At a length of 153 feet long, communication on an E-3A Sentry between the aircraft’s four flight crew and more than 13 mission crew members would require airmen to unbuckle from the safety of their seats and stroll back and forth between stations. To address communication among the crew, an E-3A is equipped with an Airborne Intercommunication and Public Address System like the one shown in Image 1. This intercom system connects flight members via phone or when using an oxygen mask by microphone or boom headset microphone.

Another system of the E-3s communication is the control indicator, shown in Image 2, which provides a means of controlling the frequency of the flight deck radio equipment. This component performs the dual function of presenting visual information from other sources such as navigation, radar, and the like and regulating the mode of operation of those sources. 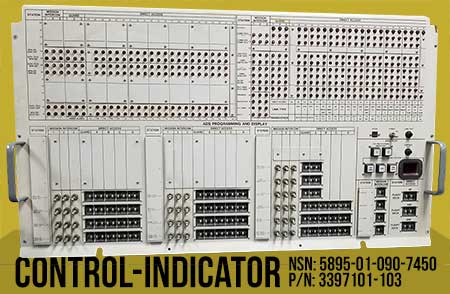 Five nations operate the E-3 Sentry. These include the United States, France, Saudi Arabia, Japan, and the United Kingdom. NATO has also purchased 18 E-3 aircraft which are used to monitor airspace for NATO operations around the world. Since it was introduced into operational service in March of 1977, over 68 E-3 Sentries have been produced and have patrolled no-fly zones over Bosnia and served in Operation Desert Shield, Enduring Freedom, and Iraqi Freedom, among others.

Duotech Services, Inc. (DSI) technicians provide military electronic repair services, MRO support for all communication components of the E-3 as well as its avionic and radar systems. Testing of electronics systems to identify which sub components are malfunctioning, from a circuit board to the power source, is performed using DSI’s reconfigurable ATE, the Automatic Reconfigurable Test and Emulation System (ARTES). Duotech engineers have also developed custom test fixtures that enable technicians to rapidly evaluate individual circuit cards from an AWACS video processing system, AN/DPY-1, to determine what components on the circuit board are defective. DSI then repairs any defective systems to return the critical avionics to full service.

DSI is a qualified FAA Repair Station and maintains AS9100C and ISO 9001 certifications with the scope of repair, design, production (including CNC machining and laser cutting), testing and overhaul Services for electronic and electro-mechanical equipment for military and commercial applications. Duotech has the capability to repair the mission-critical electronics systems of the E-3 Sentry, P-3 Orion, and C-130 Hercules aircraft.