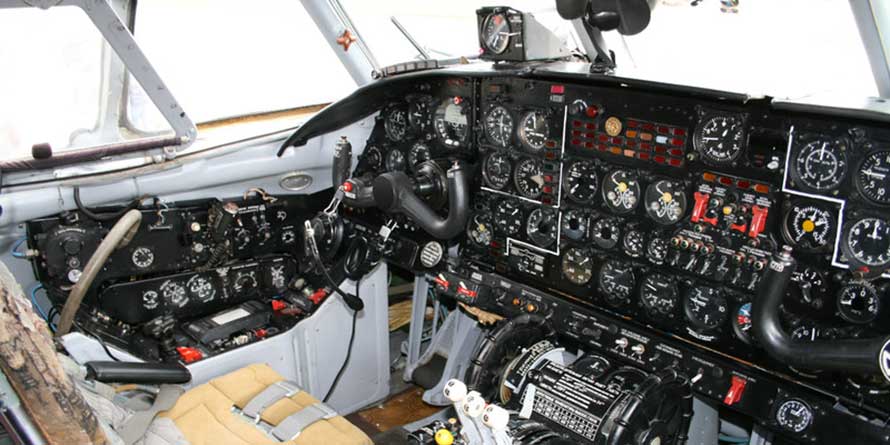 An aircraft cockpit instruments include altimeters that show the aircraft’s altitude above sea-level, indicators that provide airspeed and attitude (artificial horizon) that display the plane’s relation to the horizon, and an attitude indicator that lets a pilot know if the wings are level and if the nose is above or below the horizon line or in level flight.

The compass, first used for navigation in approximately 206 BC by the Chinese, has been utilized for centuries by sailors to navigate the oceans. Pilots also use the compass for orientation of their surroundings and to navigate from point to point during flight. The magnetic compass points to magnetic north with a magnetized needle that rotates on a pivot, aligning itself with the Earth’s magnetic field.

There are errors associated with a compass in an aircraft. Understanding what these errors are, what causes them, and being able to compensate for the errors allows the navigator to be confident of where they actually are in the sky. A pilot does not want to be flying in the dark believing they are twenty miles away from a mountainside when actually they are almost upon it.

Magnetic Variation is a result of when the Earth’s geographical north pole location and the location where magnetic north exists are not the same. This is also true with the Earth’s geographic south pole and magnetic south locations. The angle difference between magnetic north and true north is called the magnetic declination. This difference will vary depending on the compass location in relation to magnetic north. The variation affects all compasses and maps used for navigation will have a key that demonstrates the difference between the two so a navigator can compensate.

Magnetic Dip, also known as Magnetic Inclination, occurs as the compass gets closer to the North or South Pole. Unlike at the equator where magnetic lines of flux are parallel to the earth, at magnetic poles, these magnetic influences dive down into the ground at the magnetic poles, pulling the compass’ magnetic points on the needle the same way, affecting its turning capability and giving incorrect readings. To compensate in an aircraft, a compass needle may be weighted to keep the needle balanced.

When the aircraft is turning, it causes the compass needle to produce incorrect results also. Once the turn, acceleration, or deceleration motion is completed, the needle will settle back into its true position.

Local environments can also produce an error in a compass. Magnetic Deviation is another error that affects a compass. Because it is a magnetic instrument, a compass’ function can be interfered with by nearby materials containing iron. Electromagnetic forces flowing through the aircraft’s structure and nearby electrical systems and engines can also cause significant compass errors. To correct the deviation of a compass, the instrument can be calibrated by an aviation maintenance technician and a compass deviation card attached next to or beneath the compass to assist a pilot in observing a correct heading.

With a magnetic compass that floats in a fluid, the instrument will be unreliable during acceleration, deceleration, turning, climbing, or descending. Calibrated to work in unison with the compass, the heading indicator discussed above provides more reliable readings when the magnetic compass is affected by its surrounding conditions.

Many newer aircraft, or those that have been recently retrofitted, have glass cockpits. These cockpits are full of display monitors versus analog or mechanical instruments. In the glass cockpits, instead of reading a dial at an angle which will look different based on which seat you occupy, you will see a digital display without a parallel effect. Instead of deciding what a needle’s position is on a gauge, you will see a numerical value.

Duotech designs and builds aircraft instruments like the Digital G-Meter. A G-meter, also known as an accelerometer, monitors the g-forces a pilot experiences during flight. Monitoring these forces is important for a pilot, especially in multi-role and air superiority fighters like the F-16, F-15, and F-5, because very high g-forces on the body can make a pilot experience tunnel vision, blackout, or even death. Duotech’s Digital G-Meter has a dual-dichroic display that informs the pilot of acceleration experienced by the airframe as well as the range experienced during that flight. 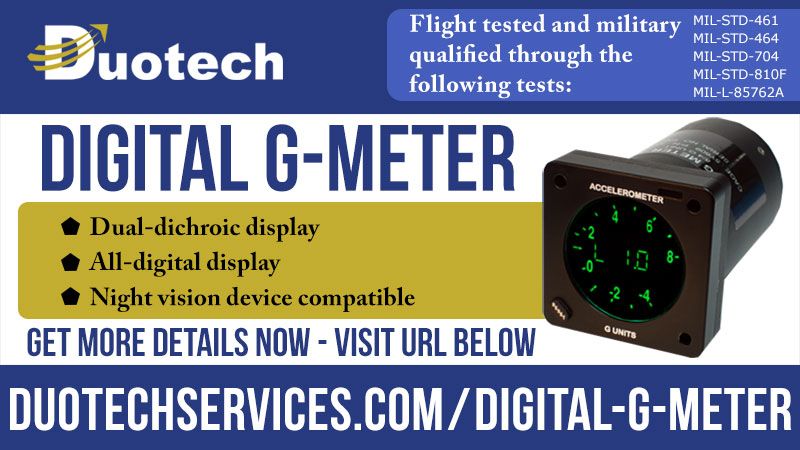