9 Everyday Applications of Accelerometers, or G-meters 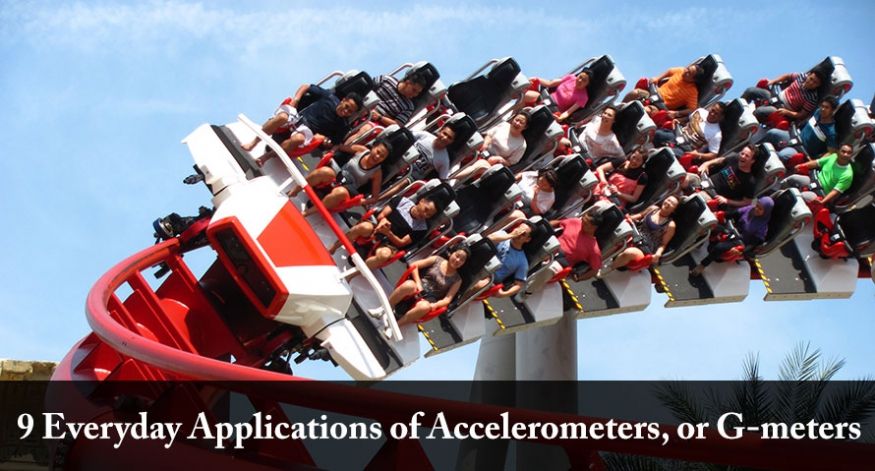 Have you ever felt g-forces? If you’ve been in an airplane and the pilot turns, climbs, accelerates, or decelerates the aircraft then you have. Depending on the situation, g-forces can apply extreme pressure to the body or can force a feeling of weightlessness, often described in terms of negative g-forces.

G-force is measured in units of g. One ‘g’ is equal to the force of gravity at the Earth’s surface, or an acceleration of 9.8 meters per second squared. You don’t have to be an airplane pilot or passenger to experience g-forces. You encounter them every day. When riding a roller coaster with lots of turns you can experience 3-6 g. Stand up on the Gravitron ride at the carnival and you’ll feel close to 3 g. A driver of a Formula One car or a Stock Car can expect close to 6 g in tight banking turns. Just standing on earth at sea level you are at the standard of 1 g.

Monitoring the number of g-forces experienced by the pilot is important. A typical person can sustain approximately 5 g. Higher g-forces on the body can lead to tunnel vision, blacking out, and if sustained, even can cause death. Excessive negative g-forces can cause “redout”, a situation where the body is falling downward faster than the natural rate of free fall. Through the use of special flight suits and training to limit the blood running to the lower extremities, fighter pilots can sustain 9 g and avoid passing out.

To an aircraft, monitoring g-forces using an accelerometer is important. These g-meters monitor the acceleration experienced during training and combat maneuvers. Monitoring these extreme forces during flight using a g-meter in conjunction with a data recorder enables aircraft technicians to understand the stresses both the pilot and the airframe endures for the duration of a flight mission.

9 Everyday Applications of Accelerometers, or G-meters

Though not recognized as being part of so many tools and applications, accelerometers are important to our everyday lives. If you’re reading this article on your smartphone or tablet, turn the device at this moment and witness the accelerometer in action in your very hands.