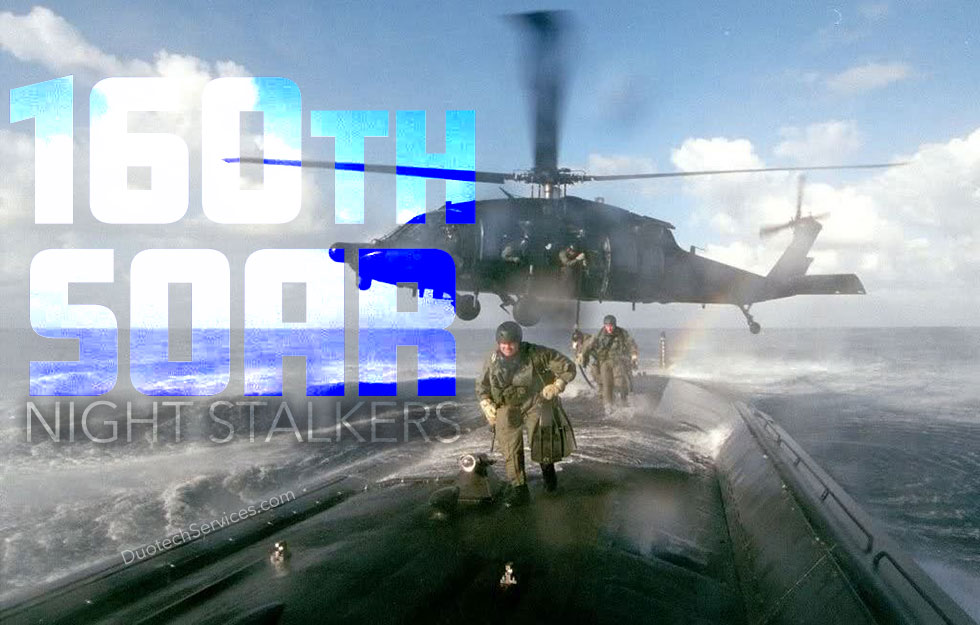 We recently learned the news about the mission to capture the leader of ISIS, Abū Bakr al-Baghdadi, during Operation Kayla Mueller. The Joint Special Operations Command (JSOC) units performing the mission launched from Iraq and traveled hundreds of miles across Syria. They did not get trucked in, nor did they hike in. As is typical for a quick-strike mission, JSOC units normally infiltrate and exfiltrate their highly secretive missions by riding air assets. Though there may be an exception to any situation, they don’t go into these dangerous environments to perform high-risk missions with just any aircraft unit. They SOAR. 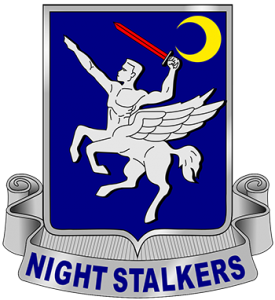 “Death Waits In The Dark”

The 160th was founded in 1981 following the failed attempt to rescue American hostages in Iran in 1980. President Jimmy Carter gave the order for the U.S. military to address a plan that would better prepare them to make another attempt. At that time there were not any special operations helicopter units to train for the mission.

When it came time to pick the first members of a premiere night fighting aviation unit, the Army began looking in their 101st Airborne Division. This new unit would initially be named Task Force 160 and become the Army’s only Special Operations Aviation force. It would be October 16, 1981, when Task Force 160 would be redesignated the 160th Aviation Battalion. Five years later after their 1983 involvement in Operation Urgent Fury in Grenada, the Night Stalkers would become the 160th Special Operations Group (Airborne). 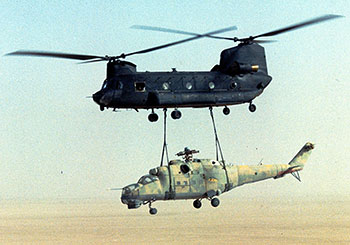 A U.S. Army CH-47 Chinook, from the 160th Special Operations Aviation Regiment (Airborne), sling-loads a Mi-24 Hind out of the desert of Chad, known as Operation Mount Hope III

The 160th continued to grow through the 1980s and their missions provided the opportunity to display their prowess. They would be instrumental in providing aviation services in clandestine actions like Operation Prime Chance in the Persian Gulf, Operation Just Cause in Panama, and Operation Mount Hope III, where the 160th secretly retrieved a Russian Mi-24 Hind Helicopter in Chad and brought it back to the U.S. for study.

In June 1990, they would be designated a regiment enabling the acronym SOAR, or Special Operations Aviation Regiment. They fly light, medium, and heavy helicopters modified to meet the unit’s unique JSOC operations. They also have unmanned aerial vehicles (UAV) to provide surveillance during those same missions.

Their MH-47G is a special operations version of the tandem-rotor, heavy-lift transport helicopter. It is crewed by a pilot, co-pilot, and three crew chiefs/gunners. It can be fitted with special operations equipment for special patrol insertions and extractions. For defense, the MH-47G is armed with two 7.62mm air-cooled miniguns and two belt-fed 7.62mm machine guns. The two powerplants have infrared exhaust suppressors to reduce IR signature. The MH-47 has a maximum speed of 195 mph and a maximum mission radius of 390 miles.

The 160th employs specialized variants of the UH-60 Black Hawk. These MH-60 aircraft are flown exclusively by 160th SOAR.

The MH-60M is the transport version equipped with specialized equipment to perform JSOC insertion and extraction missions during day and night and in adverse weather conditions. These Black Hawks have capabilities of Fast Rope for quick insertion into a mission and a Special Patrol Insertion and Extraction System (SPIES) rope with rings allowing up to 8 fully loaded operators to be extracted quickly.

The Direct Air Penetrator (DAP) is a gunship variant of the MH-60 that conducts attack helicopter operations supporting the insertion/extraction mission. It has two miniguns fixed forward-facing and or two 30 mm chain guns. Flanked on each side is a set of stub wings capable of carrying four pods that can fire 19 rockets each. It can also be fitted with 16 AGM-114 Hellfire laser-guided missiles and air to air Stinger missiles.

Both the AH-6 and MH-6 are a six-bladed single-engine light utility helicopter flown by the 160th SOAR. These light attack/assault helicopters are a military version of the civilian airframe, the MD530F. Operated by a crew of two Night Stalkers, both the AH-6 and MH-6 are highly maneuverable and ideal for short-range reconnaissance and light combat support. This helicopter has a maximum speed of 160 mpg and a range of 230 miles.

The AH-6 is the light attack variant used by SOAR for direct action or in a close air support role. It can be armed with M134 miniguns, rocket pods, laser-guided anti-tank missiles, and 3 barrel Gatling guns.

The MH-6 is unarmed and designed with an External Personnel System mounted on each side of the aircraft to carry 4-5 special operations fighters. With the combination of the Fast Rope for quick insertion, it can quickly insert and extract their combat unit. It is also small enough so that it is capable of landing on a small roof or in narrow streets.

If maintained well, helicopters like the Black Hawk, Chinook, and Little Bird can have a long service life. As the helicopter ages, so do the electronics the pilot depends on to keep it flying. Upgrading or completely replacing those avionics systems can be out of the budget for many militaries, government, and civilian operators. Even with tight funding, these systems must be maintained. Another option for supporting the aging and obsolete systems is repair or overhaul of the electronic and electromechanical equipment of the aircraft.

Duotech Services solves the engineering, reverse engineering, repair and re-manufacturing problems of military and civilian agencies as well as aerospace and commercial users of electronic and electromechanical equipment in rotary-wing aircraft. Along with the CH-53, other platforms Duotech supports include the OH-58 Kiowa, UH-1 Huey, UH-60 Black Hawk, AH-1 Cobra, and AH-64 Apache. Duotech provides high-quality services to our customers within the budgeted schedule, maintains an AS9100D registration, and is a qualified repair station for thousands of items. You can begin your Part Number Search or request a repair quote from Duotech today.

Learn more about the 160th SOAR in the two videos below. If you enjoyed this article and videos, please share it with your friends and colleagues.