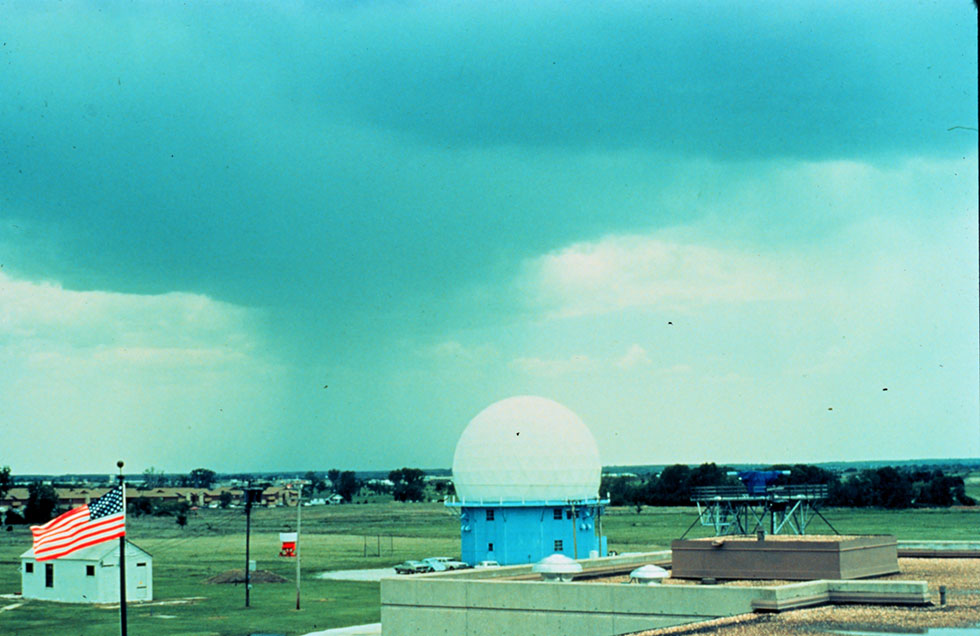 As a bad storm moves across the Midwest landscape, a team of meteorologists study the weather’s behavior and make quick predictions. The information they gather on the approaching thunderhead prepares the community for rain as well as alerts them to any potential damage that might come with high winds. The scientists gain this data from a nearby doppler radar tower, one of the 159 radar towers the NOAA National Weather Services have across the United States.

The doppler radar like the meteorologists’ use is a specialized radar system that bounces microwave signals off a target like clouds and rain. These radio signals are sent out in a circular pattern from the doppler radar tower. The signals get scattered when they come in contact with precipitation but some of the signals returned. The amount of returning signals depends on the intensity of the precipitation. Measuring the time it takes for the radio beam to return to the tower using the Doppler effect helps identify the distance and speed of the storm.

The Dopper effect is the change in frequency or wavelength of a wave (or other periodic events) for an observer moving relative to its source. In 1842, an Austrian mathematician and physicist, J. Christian Doppler, discovered the principle that is named after him as he observed the flickering of light from celestial stars. As sound is altered based on its distance and direction from the observer, he theorized that the light emitted from a star altered based on its velocity relative to earth.

As noted by ThePhysicsClassroom.com, “The Doppler effect is observed whenever the source of waves is moving with respect to an observer.” Sheldon Cooper of The Big Bang Theory gives us a more technical description: “The Doppler Effect (or Doppler Shift) is the change in frequency or wavelength of a wave (or other periodic events) for an observer moving relative to its source.”

To continue with simple explanations, we use an example of a police car. Let’s say you are standing on a corner and you hear a police car blaring its siren driving in your direction. As the siren gets closer to you, its pitch will sound higher than it would if the car sat stationary. As the police car approaches, passes, and then moves away from your location, the pitch will go from higher to lower.

ALSO READ: How RADAR Detect, Track, and Attack Through the Clutter

There are four ways of producing a Doppler effect. Doppler Radars may be:

Like the meteorologist’s radar system, there are other radar systems that rely on the Doppler effect. They all utilize the same Doppler principle to determine the speed and direction and other factors of an object. Though some may be specialized at spotting small, faster-moving objects like an aircraft or vehicle.

Utilizing the Doppler effect, a radar gun transmits an electromagnetic radiation beam that is set to a precise frequency. When the radar gun is pointed at a moving object like a car or truck, the radio wave hits it and bounces back, returning to the radar gun but at a different frequency based on the velocity of the object. This provides them an accurate reading of the object’s speed.

Terminal Doppler weather radar (TDWR) is the type of Doppler radar system operated by the Federal Aviation Administration (FAA) near airports. These specially designed systems are important for detecting treacherous microbursts. Microbursts are very dangerous especially for aircraft that are arriving or departing, driving the planes into the ground. The TDWRs are short-range systems near or at an airport to identify dangerous weather phenomena only in the vicinity of an airport.

The pulse-Doppler radar in a plane is even more complicated. The radio beam generated in one aircraft will need to account not only the moving target but also for itself, which is moving. For a clearer picture of what the target is doing, the aircraft radar identifies and tracks a moving object while it filters out the clutter created by static ground objects and weather.

Tracking a vehicle moving along the ground from an aircraft is an incredible feat also because it is so close to background objects like the ground and road. Doppler processing by the radar’s digital computer enables the measurement of the relative velocity of all objects that return a signal.

Pulse-Doppler radar systems are used in military aircraft around the world. The APG-68 Fire Control Radar is a medium-range pulse doppler radar in one of the most popular fighter aircraft, the F-16 Fighting Falcon. Even with over forty years of service, the fourth generation F-16 is still a very formidable air superiority fighter due to the capabilities the APG-68 provides its pilot. The APG-68 steers its beam with a mechanical gimbal and has the ability to identify targets through heavy clutter with a look-down mode capability of approximately 30 miles. Look-down, shoot-down capability means a fighter jet has the ability to detect, track, and guide a weapon to a target below the horizon by filtering out heavy ground clutter that surrounds it.

Enjoy a quick 2-minute video by Ken Weathers as he describes what and how a doppler weather radar works. If you enjoy this article, please share this with your community and visit our Blog/Media section to read more articles about Radar.

Backed by 39 years of industry experience and with AS9100D and ISO 9100 certifications, Duotech is a leading source in providing responsive repair and support for your APG-68 Fire Control Radar.

Duotech is providing low cost, but highly-capable RADAR that represents current threat capabilities. Jets equipped with Nemesis RADAR are the best AdAir solution in the market today, with an unrivaled combination of performance and growth potential. Duotech Services has designed a purpose-built RADAR to support the AdAir market by presenting a solution that is: